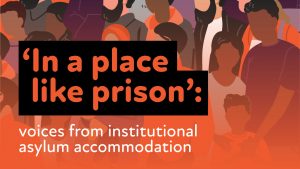 New Joint Report: ‘In a place like prison’: voices from institutional asylum accommodation

Birch Network worked with Asylum Matters alongside Action Foundation,  Birmingham Refugee and Asylum Seekers Solidarity (BRASS), Life Seeker’s Aid Charity and Stories of Hope and Home for a joint report, which looks at the experiences of people seeking asylum who have been housed in hotels, hostels, barracks and initial accommodation centres. The report demonstrates that this type of institutional accommodation causes harm, and that the UK Government’s plans to introduce new large scale ‘accommodation centres’ for people seeking asylum must be abandoned.

The organisations worked together to carry out in-depth interviews with fourteen people in the asylum system with recent experience of living in institutional asylum accommodation. Their stories shared some common themes, as highlighted in the report, including:

The findings of the report are particularly concerning given the Government’s plans, as outlined in its anti-refugee bill, to introduce new ‘accommodation centres’ where people seeking asylum will be housed. We anticipate these facilities, if allowed to come into being, risk permanently instituting the concept of large prison-like refugee camps in the UK. We are calling on the Government to immediately scrap these plans and commit to housing all people seeking asylum safely in our communities.

You can view the report here: ‘In a place like prison’: Voices from institutional asylum accommodation