Thank you for reading! This blog post, an entry from a current BIRCH host will act as the first in a series of  “Journey” blogs. This is where we will share the stories of those involved in the BIRCH community, from Hosts to Guests to Befrienders and volunteers. The aim for these blogs is give you a taste of what BIRCH does! 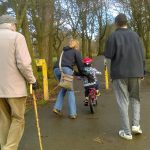 It doesn’t seem long since our  first nervous foray into hosting. Saraf, we were told, only needed a room for a month while she awaited a place in a house for destitute women.  A month! – only a month surely, however difficult it was we could cope for a month! We had only signed up for short-term hosting. With relatively young children a woman felt safest. Lizzy, who coordinated and supported Birch’s hosts would bring Saraf round to meet us and then all parties could have a little time to decide before proceeding. My son was too young, but we had asked my daughter’s views early on about hosting; she said it would be okay “as long as they aren’t sad”. I realised this reflected one of my fears. Would our home be filled with the sadness that anyone who feels forced to flee their country of origin must carry?  Was it too much to ask that their sadness be at least partly contained?

We’d done the day’s training – some facts still fresh: Did you know that by far the greatest majority of the world’s refugees flee to neighbouring countries, who are themselves struggling with poverty and instability? We knew Saraf was from Guinea in West Africa; a quick Google: no major conflicts but plenty fled particularly young women. Our training had taught us not to ask about guests circumstances, potentially such traumatic ones. That advice felt a relief too, I wasn’t sure how I’d cope with hearing the details of the traumas that many seeking asylum have gone through.

The doorbell. One of our children hides the other runs into my arms, probably picking up on my anxiety. Lizzy walks in followed by Saraf. Our eyes meet and in the exchange of nervous smiles my fears subside and I know it’s  going to be okay. Of course there were practical arrangements to iron out: We sometimes ate together; the “let’s just all be veggie” solution to a Halal diet in the family suits me well, but not so my husband! Saraf offered to cook on the days I worked later.  My husband was nervous but after discussions about his preferences and a trip to the Halal butcher, he enjoys the chicken dishes that Saraf prepares. With encouragement Saraf talks about the foods native to Guinea that she loves and how they would cook outside.

I wondered how Saraf would feel about witnessing our easy life – perhaps a stark contrast with the life she had led in Africa? But Saraf is thoughtful and careful and only once during our stay am I reminded of how different things must have been for her in her early life: As I caution my son for getting mud on his clothes “Mummy’s got enough washing to do!”, Saraf just says one word “Washing?” I suddenly realise that piling clothes in and out of an automatic machine really isn’t washing them! But later that day as the sun shines down on our “automatically cleaned” clothes on the line, I hear much giggling from the bottom of the garden. The children have persuaded Saraf onto the trampoline for her first bounce ever time where all 3 are greatly amused by her uncontrolled antics.

How lovely to be sharing our good fortune !

Your cart is empty