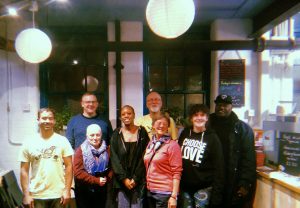 What? The group gathered at 10:30 pm at the newly opened Mix Cafe, a community cafe located in the Old Prints Works, Balsall Heath. Complimentary (delicious) food and hot drinks were provided by the staff at the Mix. The group also got to a chance to see the beautiful exhibition currently showing at the  GAP projects which has been created by artist Haseebah Ali! 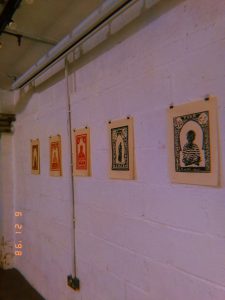 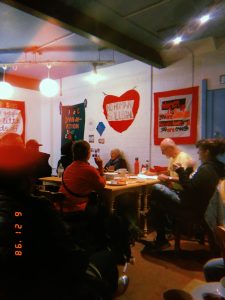 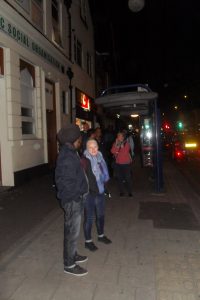 12 am: smiles and enthusiasm as the group set out onto the 50 bus to Druids Heath with the intention of staying on to go back-round into the city centre. 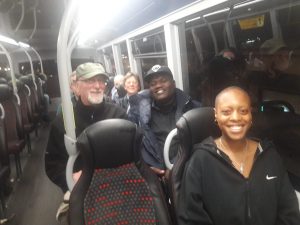 12: 42 am: after arriving at Druids Heath on the 50 bus, the bus driver announced that it was his final journey and wouldn’t be going back to the city centre. A slight detour was made as the group walked from Druids Heath to Maypole to catch a bus into the city centre. The temperature had dropped by this time yet the company and conversation were warm.

At around 1:55 am: the group arrived in the city centre from Maypole. A short walk from the 50 bus stop to the X1. Surprisingly, the city centre was quiet – no late party-goers or aggressive individuals.

2:07 am: the group boarded the X1 (limited stop) to Birmingham Airport. Perhaps a strange look or two from the bus driver as all nine of us keenly boarded. 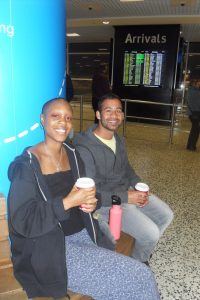 2:49 am: the group arrived at Birmingham Airport. Almost halfway through the night bus ride. A break was needed, we headed for Costa coffee. The airport was quiet.

After arriving back into the city centre, the group gathered at the X1 bus stop to decide the next steps. The group chose to board the X1 again back to the Airport. The bus driver overhearing parts of the discussion didn’t quite understand what we were doing (or why). Again a strange look.

For the group, a small decision to make. Unfortunately, for those who really have to make this decision regularly in order to get shelter, it’s a different story entirely.

Many migrants in the UK struggle to gain recognition as refugees or have their right to stay recognised must live in painfully difficult circumstances. Asylum seekers are barred from working and after an initial asylum claim is refused, the very basic government support they have to live on is cut off. Many of those who have fled here for safety are made destitute, pushed into homelessness, and left with no way to meet their basic needs.

The destitution of ‘refused asylum seekers’ and other migrants with ‘no recourse to public funds’ is a deliberate aim of government policy. There is a myriad of policy and legal instruments that make it increasingly difficult for undocumented migrants to meet their basic needs and more and more day-to-day activities for them. This is the ‘hostile environment’ which we have heard so much about recently in the media

The hostile environment operates on several levels so that undocumented migrants are increasingly trapped in a tightening web. On the one hand, it bars them from accessing the very things they need to survive. On the other, it seeks to exert maximal and unaccountable control over them: policies render it harder and harder for undocumented migrants to gain recognition as refugees or other types of leave to remain and hold out the continual threat of detention and removal into danger.

Arriving at Birmingham Airport for a second time, the scene was completely different. There were busy passengers and impatient families at the check-in.

At 4:51 am: weary, the group departed from Birmingham Airport to the city centre.

At around 5:30 am: exhausted and fatigued the group arrived back into the city centre on the X1 from the Birmingham Airport. By this time, the sun had risen brilliantly and the city appeared to come back to life again. A few members of the group yearning for their beds departed early whilst the others grouped for a well-deserved Maccies breakfast.

It was a success!

Thanks: to everyone who helped out to organise the event (HELEN HIBBERD), the staff at the Mix Cafe (Kerry and Arron!);  Jane Thakoordin for being on standby (in case anyone wanted to leave early); and the Birmingham night bus drivers who we came across (and for all those we didn’t, thank you. Without them there would be no 24-hour bus services’ which acts a shelter for many vulnerable individuals).

So far we’ve raised £2700! A massive thank you to everyone who has donated so far! Don’t worry, there is still a chance to donate if you haven’t: https://uk.virginmoneygiving.com/charity-web/charity/displayEventDetails.action?eventId=32704

Alternatively, you can share this link with your friends and family!

Birch is also organising a fundraiser event with LushSpa in Solihull on Saturday  6th and Sunday 7th July 2019 to raise money for the Hosting project.  For more information contact: david@birchnetwork.org

LUSH also made a short film regarding our hosting project http://player.lush.com/channels/times/tv/behind-headlines-seeking-asylum-spare-room

What will your donation help to do?

Outcomes for guests were varied: three guests moved to other voluntary sector provision; two guests moved on to Section 4 Home Office accommodation due to the progression of their Home Office applications; one guest claimed asylum and moved into Section 95 accommodation, another finally got her residency visa after a long wait; one guest received Leave to Remain; a long term guest is awaiting the outcome of a lengthy residence application after the Home Office admitted in writing that they had lost all her application paperwork (https://www.facebook.com/groups/IAmEsther/).

Two guests were taken into local authority accommodation (one being an unaccompanied care leaver). Four remaining guests had ongoing placements into the next period, and are preparing further representations.

Since we were established in April 2011 BIRCH hosts have now provided 13,054 nights of accommodation to people who would have been otherwise been made homeless and destitute.